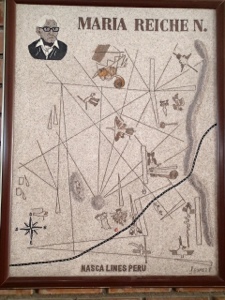 The Nazca Lines were unknown in the 1930’s when the highway that stretches from Canada down though the Americas was built. It actually cuts through the edge of the area where the lines are. The lines only became known after the first commercial flights started going over them and the pilots started talking about them. Maria Reiche’s took an interest and she walked the lines and mapped them.

Our guide told us that they were made by scraping the first layer of sand away and exposing another color of sand.