Learning how to build an island. 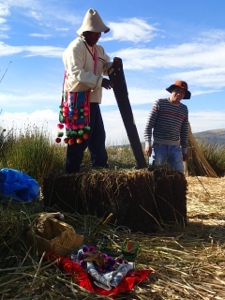 The president, standing on top of the miniature island, and our guide showed us how the Island was made. First they cut blocks of the reeds with their roots…originally this was done by driving sticks into the soil around the roots. Now they have big saws. These blocks are attached to each other and the reeds are cut to lay as a bed over them. Several layers of reeds are placed in a cross cross pattern on top. Then houses are built using the reeds. Flat stones are placed where the cook stoves – pottery stoves – are to be placed since the dry reeds are flammable and, indeed, provide the fuel for the fires under the stoves. This is hard work and it never really ends because the reeds that make up the floor of he island have to be replaced every 15 days!

Several families live on each island and share the work of the island. They had their craft wares out as well and as soon as the teaching ended, Laya came over to grab ‘three people’ to come to her house where, of course, we bought trinkets. The other 2 people with me were an oncologist and his wife from Vancouver, B.C. That I kept being with on tours or crossing paths with.

I am first and foremost young at heart. I am proud to be a mother and grandmother. I have been a nurse since graduating from BCIT in 1974. I am now ready to also be known as a world traveller.
View all posts by Gramma Barbie →
Image | This entry was posted in Uncategorized. Bookmark the permalink.