I had planned to travel to Seville today by train, but my Airbnb hosts were adamant that the bus was the way to go. Sooooo I changed my plans.

I had no way to print the ticket and the website said that I might not be let on the bus unless I had a printed ticket.  Sooooo I got to the bus station 1 1/2 hours before departure and the bus was full.   The next business to Seville was not until much later and check in at my next Airbnb ends at 2pm because she works.  What to do……should have gone by train…..

I chose to take the bus to Cordoba and then to Seville arriving at 6:15pm instead of the later bus that is direct, but arrives at 10pm.  My hostess won’t be home until after 11pm so suggested that I find other accommodation for tonight.  I have asked her if I can meet her at her house after work.  I picked her place for a number of reasons so am hoping she will agree….wish me luck….

Oh well, if nothing else, I get to see part  of another town in Spain… 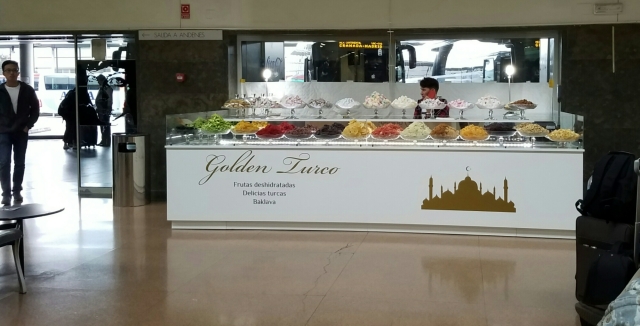 This was an interesting display of dried fruits and candies…not something you would see in a North American buss station.