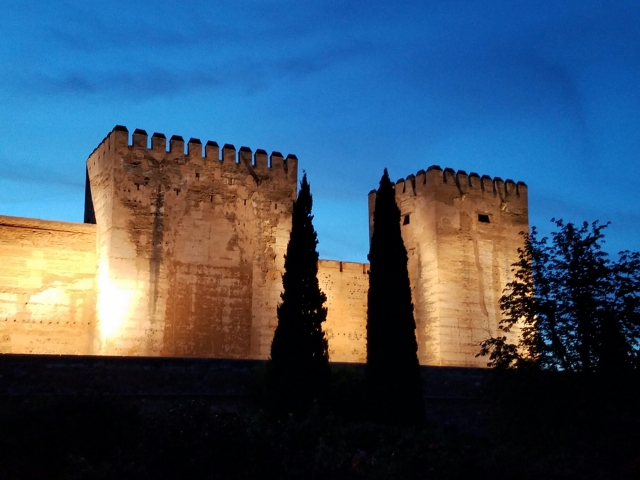 My visit to Granada would not have been complete without a visit to Alhambra.   I visited the open, free area in the morning and had the great fortune to get a tour of the palaces in the afternoon. Great fortune because I had bought a ticket online before leaving the school only to have it cancelled for some unknown reason.  I printed it anyway and showed up.   They went out of their way to accommodate me because I didn’t know why my ticket was cancelled. There are only a limited number of tickets for the palaces and it was sold out, but they found a couple of unused tickets.  My guess is bought by people who did not show up. 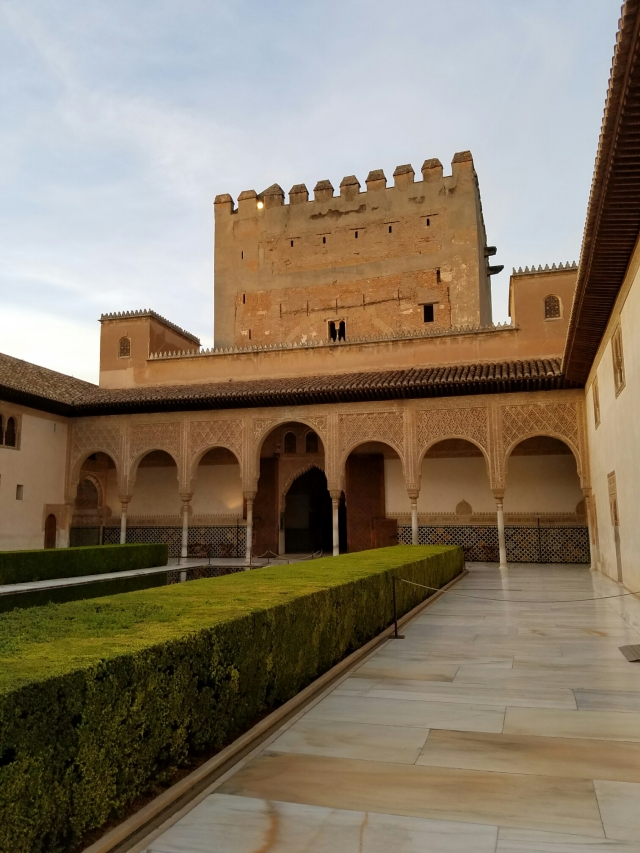 The guide was very informative and I learned a lot of history of the area.  One of the first things she told us was that Alhambra got its name from the color of its walls which are red.  Alhamba is an abreviation if tbe Arabic ‘Qal’at al Hamra’ which means red fort.

Another thing that I learned there was the meaning behind the saying ‘I am in seventh heaven’, but that belongs in another post…. 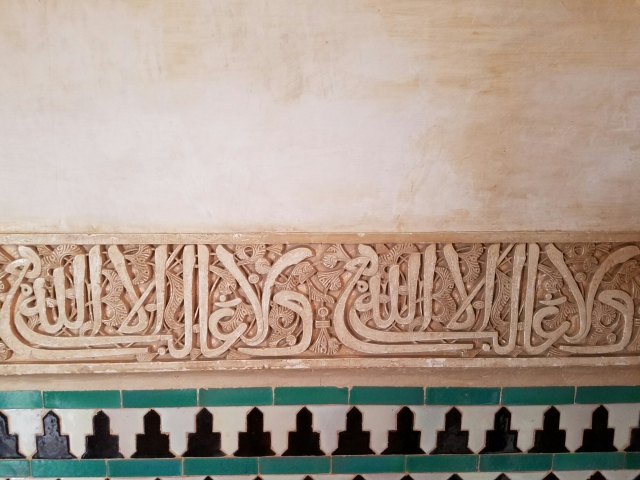 The Arabs ruled Southern Spain until they were conquered by King Ferdinand and Queen Isabella of Northern Spain. They built Alhambra and the Muslim beliefs are well represented in the palaces.   Muslims do not have images of Allah and seldom include living creatures in their decor for fear of creating idols.  Instead everything is symmetrical and perfect as a way of indicating the perfection that is Allah. Allah is also written on the walls in the intricate designs. 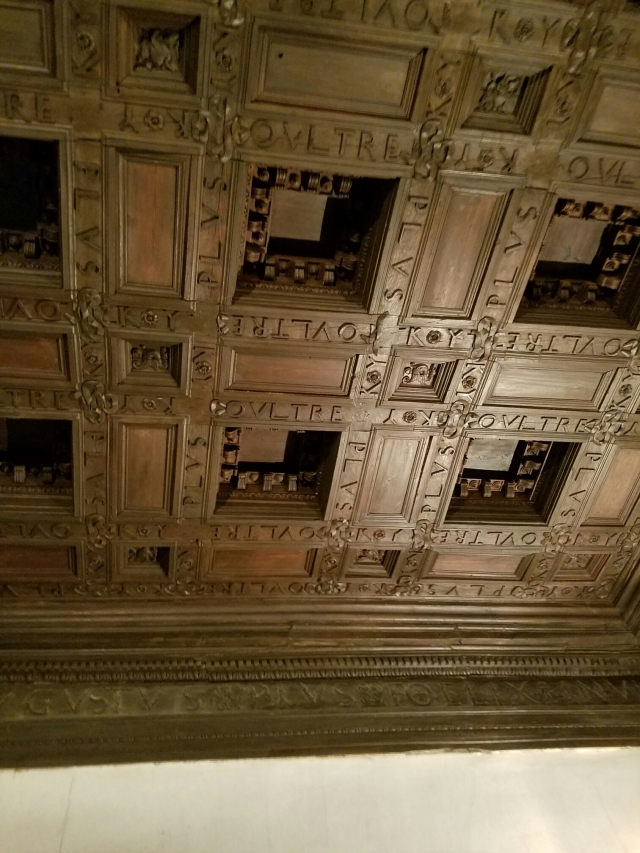 Alhambra was not just a fortress; it was a whole town surrounded by a fortress like wall.  There are 3 palaces within that wall.  Two are very plain on the outside and very ornate on the inside.  That was the Muslim way of building.  The third was commissioned by Queen Isabella and it is very plain inside as was the Christian way.  The walls of that palace were covered with intricate tapestries most of which have since been destroyed or taken as souvenirs by the people who inhabited Alhambra after it was abandoned. During that time some of the intricate woodwork from ceilings they could reach was burned for to provide heat.  The wood is mostly cedar that was imported to the area. 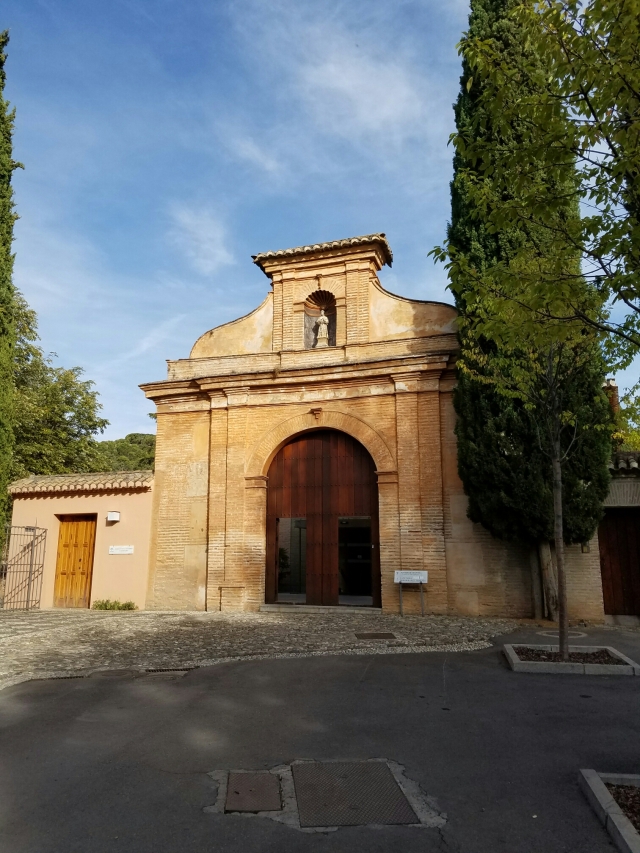 Alhambra was the seat of power in Granada.   Only the ruling class lived within it’s walls.  The working class lived outside Alhambra within another shorter wall. The gypsies, who arrived as servants to Queen Isabella, lived outside the second wall in caves that many still inhabit today.  Many have house like fronts that can be seen from a palace balcony in Alhambra .  Flamingo shows are often performed in caves turned into restaurants. 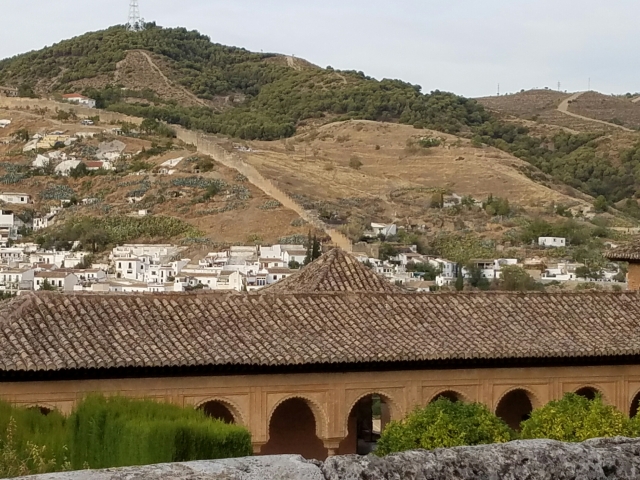 On the left is Granada.  Remnants of the wall that protected the city run up the middle.  On the right, outside the wall, is the hillside with the caves where the gypsies still live.