Arriving at The Tower of London

As one walks towards the public entrance to the infamous Tower of London, the cobblestone pathway is along the river banks. It is built over where the River Thames once flowed to surround and protect this palace. A fact that I was not totally aware of is that this was a Royal Residence for centuries. I knew it was used as a prison and to house the Royal Jewels, but not that it also housed the Royal Family.

Though no longer a residence, it remains a palace. A palace within which the people who work there now have apartments. Currently the youngest resident of the Tower is a 4 month old baby girl. 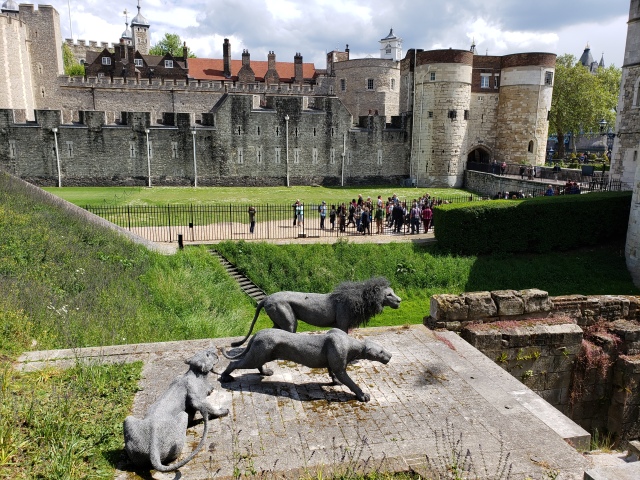 Approaching the entrance of the Tower from Tower Hill you see wire statues of lions. This is where the Lion Tower once stood. It housed the lions until it was demolished in the 1800s. There are many of these wire statues throughout the Tower to commemorate the wild animals that one lived in the Tower.

The crowd of people in the background are standing in what was once the river moat. They are starting their tour with a Yoeman Warder. The tour is included in the price of admission and is well worth 45 to 60 minutes of your time.

Of note, Tower Hill was where executions took place. Total confirmed from 1388 to 1780 were 122. Only 93 were beheaded. Others were hanged, firing squad, burned at the stake, or hanged drawn and quartered…. none were pleasant deaths.

Within the walls were other beheadings and other executions… 22 in total. And even the murders of 2 young princes by their uncle. These walls have few pleasant memories apparently.

One amusing story about a person awaiting fulfillment of there death sentence was relayed to us by our Yoeman Warder. Lord Nithsdale was to be executed in the morning. His wife brought some friends with her on her final visit to say goodbye to her husband. They were in and out of his living quarters making quite a spectacle and distracted the guards while dressing the lord in women’s clothing and covering his beard with thick makeup. They whisked him away while his wife stayed behind wailing and holding an imaginary conversation with him. As she left, she asked that they leave him to make his peace with God for one hour. The next day the 4 guards were questioned as to why they did not notice a man with a full red beard standing nearly 7 feet tall leaving. Needless to say, they all lost their jobs and… perhaps… their right to breathe…. the Lord and his Lady fled to Italy and lived long and happy lives.

The irony of that story lies in the fact that Lord Nithsdale was to be pardoned the next morning… but, love waits upon no kings will… 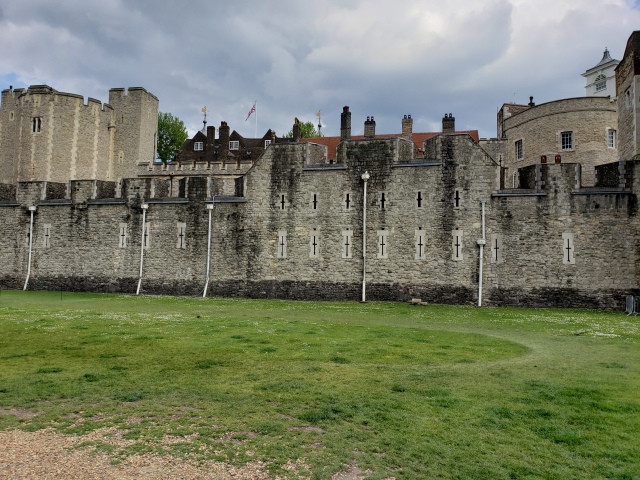 This picture is taken from inside the moat area where we were standing, like the people in the picture above, awaiting the start of our tour.